Back to all posts

In my last Blog post HERE I told you about my Thunderbird Bass. It was a nice machine and it played well. Since making and playing the Bassanjo I haven't really play the Thunderbird much and I recently sold it to a friend who'll get more use out of it than I will. It seems that I play the Bassanjo exclusively, much to Lamont's disdain! That my friends, is the topic of today's post! 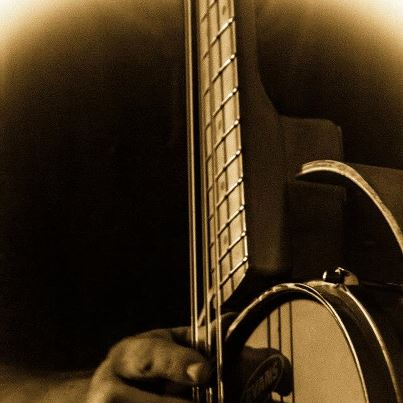 It's the fall of 2012, the Creek Heathens had earlier that summer been born, mostly in name only at this time, and we were working out a few songs. I had been struggling to find a bass to play in acoustic situations. We'd played around a few campfires and it became clear I'd have to come up with an acoustic bass to join in the fun. Lugging around an amp, extension chord, generator,. and assorted electronic devises to play acoustic music just wasn't going to cut it.

I purchased an acoustic bass guitar which no one could hear me play, not even me. So, I was on the look-out for a stand-up bass, but finding a reasonably price stand-up was nearly impossible, let along a decent one. I had to find a different way. Being a bit of a tinkerer I contemplated other possible solutions to producing bass notes acoustically and being a big fan of Split Lip Rayfield I knew alternative and interesting possibilities were out there. 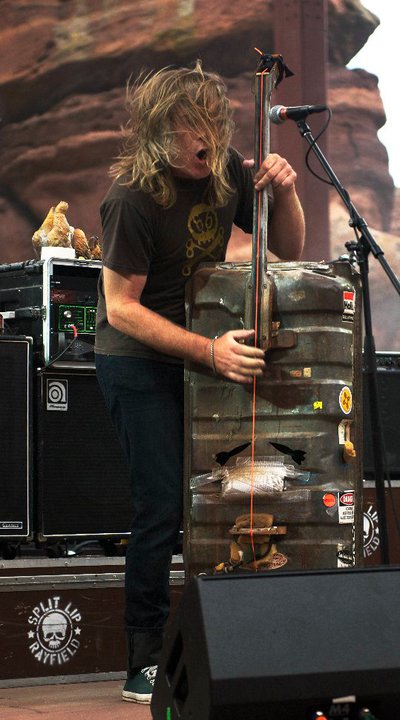 I looked into washtub basses of different styles and designs

Cliff David on his Washtub Bass

How about other interesting and inventive bass designs 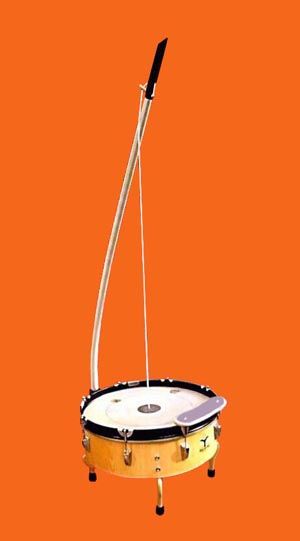 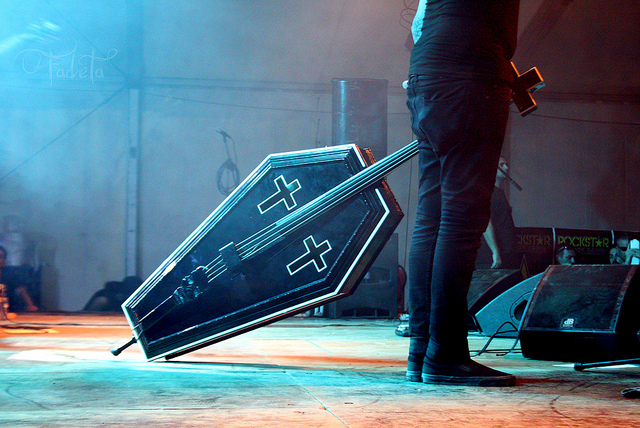 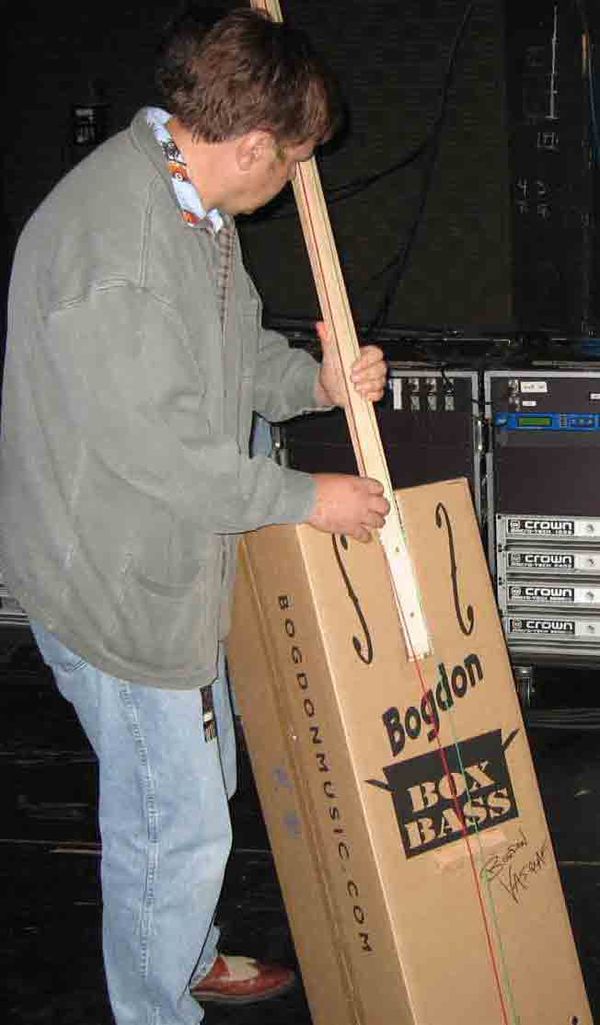 Then I came across the Gold Tone Bass Banjo

Well being cheap and broke I wasn't going be buying myself a Gold Tone bass banjo anytime soon. So I looked around me to see what do I had that might work, an old bass guitar, as discussed in a previous blog post HERE, and an old drum set sitting in the corner. I had previously picked up some Weed-Wacker style bass strings along the way and I figured I could manufacture the rest of it! I knew I could make myself something similar to the Gold Tone Bass Banjo while I keep looking for a Stand-Up bass. I had a plan but I wasn't too sure it was going to work out and I had no idea what it would sound like. even if it didn't work out it would be fun to build at least!

It's mid September and hopefully you know what that means, the Walnut Valley Music Festival in Winfield, KS. As usual I couldn't save up enough time off from work to go from Land Rush and stay till the End like I really want to do, but I could afford to take a couple Friday's off. So I made my way towards Winfield right after work on Thursday so I'd be there Thrusday night a week before the festival. I'd spend 3-days there and head back home on Sunday to be back at work on Monday. That's 4 long days of working till I could get back to the festival the following Thursday!

As always that first weekend was great, but not having a bass to play was driving me mad. I made a commitment that I'd build my Gold Tone styled bass banjo while I was back and have it for the festival the following weekend. This contraption had been rolling around in my head for a few weeks now and I had my plan pretty much worked out. On Monday after work I purchased the materials I needed, which I took to a friend's house and he and I got to cutting and gluing up the parts. Tuesday night it was back to my friend's house for some shaping and sanding and getting her mocked up. On Wednesday it was on to final assembly. The bare-bones Bassanjo was ready to roll on down to Winfield with me after work on Thrusday! 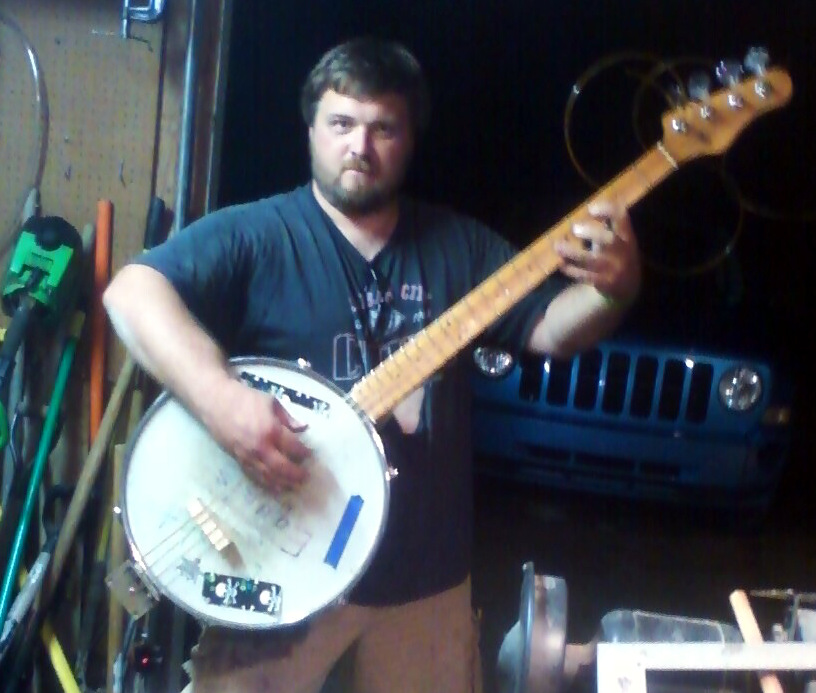 I have to give a huge shout out to my friend Wade Mullins, for without his help and patience with all my crazy concepts the Bassanjo would have never been built in such a short time. Thanks Bro!

That was a fast paced furious build. It was just thrown together quickly, but the main structure still remains pretty much the same. It's a beast, though it's hard to tell from this pic!

You might notice that this beginning Bassanjo is considerably bigger than the Gold Tone version and there really isn't any comfortable way to play it the way a Gold Tone Bass Banjo is played. The body is a floor tom cut down to about 12 inches. The neck was from my old P-Bass as discussed in a previous blog post HERE, and the Nut and Bridge had to be custom made to accommodate the Weed-Wacker style stings. Take note that there are four strings on the above version of the Bassanjo and that the Bassanjo as I play it now only has three. More to that story coming soon! 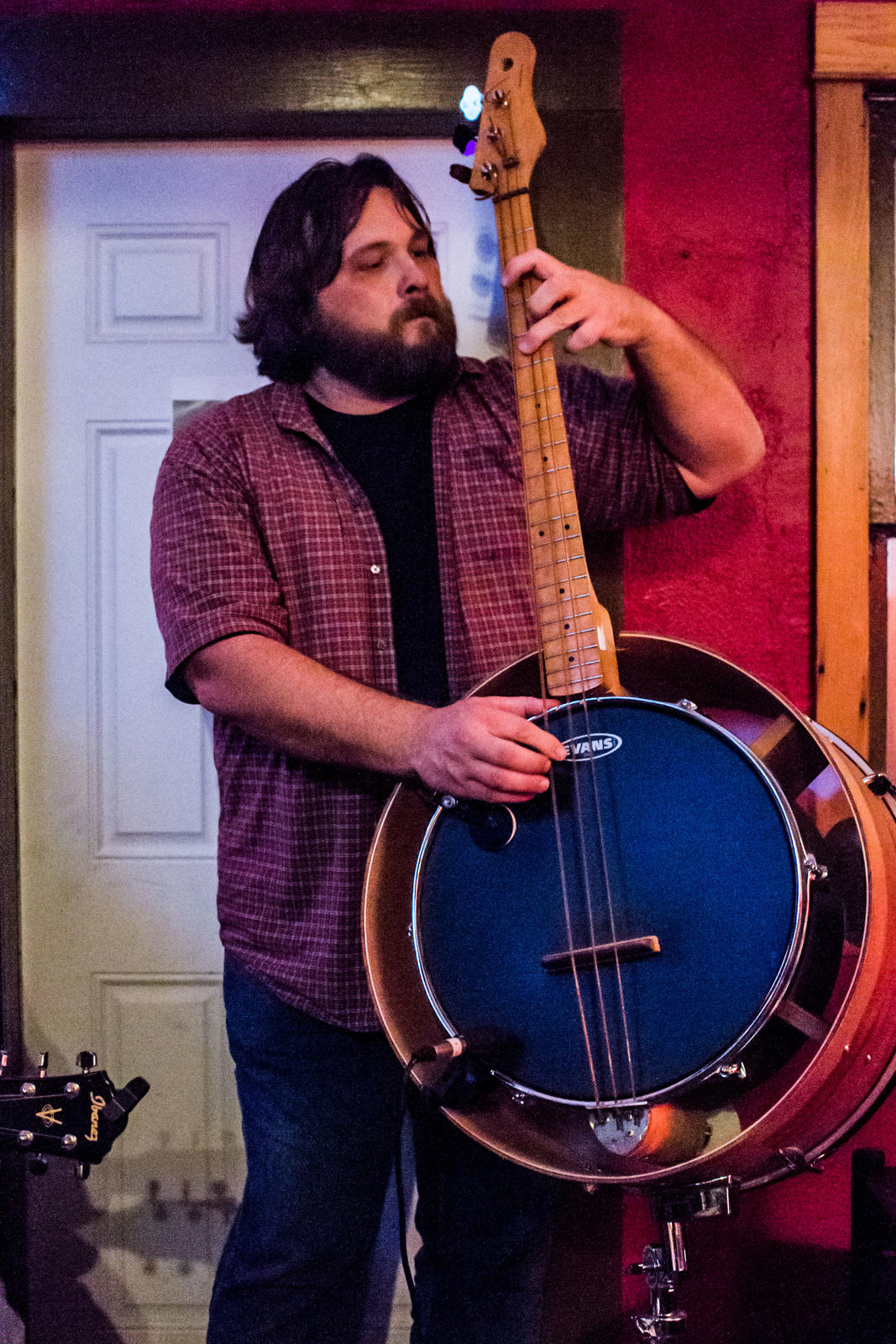 As you can see from the photo there have been a lot of changes to the Bassanjo, made by trial and error to improve the sound and playability of the instrument. In future posts I'll go into those changes and alterations, so check back for that.